Skip to content
The answer to this question depends on your specific situation.
By Chris Allen, Aug 20, 2019

My daughter played for a nationally ranked, competitive soccer team before she graduated from high school.  After almost every game, her coach would gather the team and discuss the highs and lows of their performance.  He believes the adage “where performance is measured, performance improves.”

Now that the dust has settled after our first busy season following the historic Tax Cuts and Jobs Act (TCJA), let’s measure some impacts of the new law.  In case you missed it, the TCJA is widely considered the most extensive tax modification in the past 30 years. So, with the busy season over, let’s debrief. Who is winning under the new law?  Who is losing? And, what have we learned?

One stated goal of tax reform was to simplify the US tax system—you may remember President Trump holding up the sample “postcard” tax return.  So, was this goal accomplished? The answer to this question depends on your specific situation.

The Tax Foundation (a nonprofit research organization) concluded that tax reform “simplified the tax filing process for millions of households.”  By doubling the standard deduction, the TCJA is expected to cut the number of people who itemize their deductions from 47 million to just 18 million; which calculates to only 14% of US households.  In addition, changes to the dreaded alternative minimum tax (AMT) have reduced its reach so that fewer taxpayers will be bitten. Finally, The Internal Revenue Service estimates the average time to complete an individual tax return will decrease by 4 to 7 percent.

With that background, simplification was NOT what we experienced at BFBA.  The TCJA itself is 1,097 pages of new tax law.  In addition, there are more than 3,200 pages of regulations now issued interpreting this law.  To complicate matters further, many of these regulations were issued after our busy season had begun.  You might say that the rules to the game were changing after we had already started to play.

At the end of June, the IRS released the first set of tax return data for 2018.  Based on these figures, the Tax Foundation provided the following analysis: 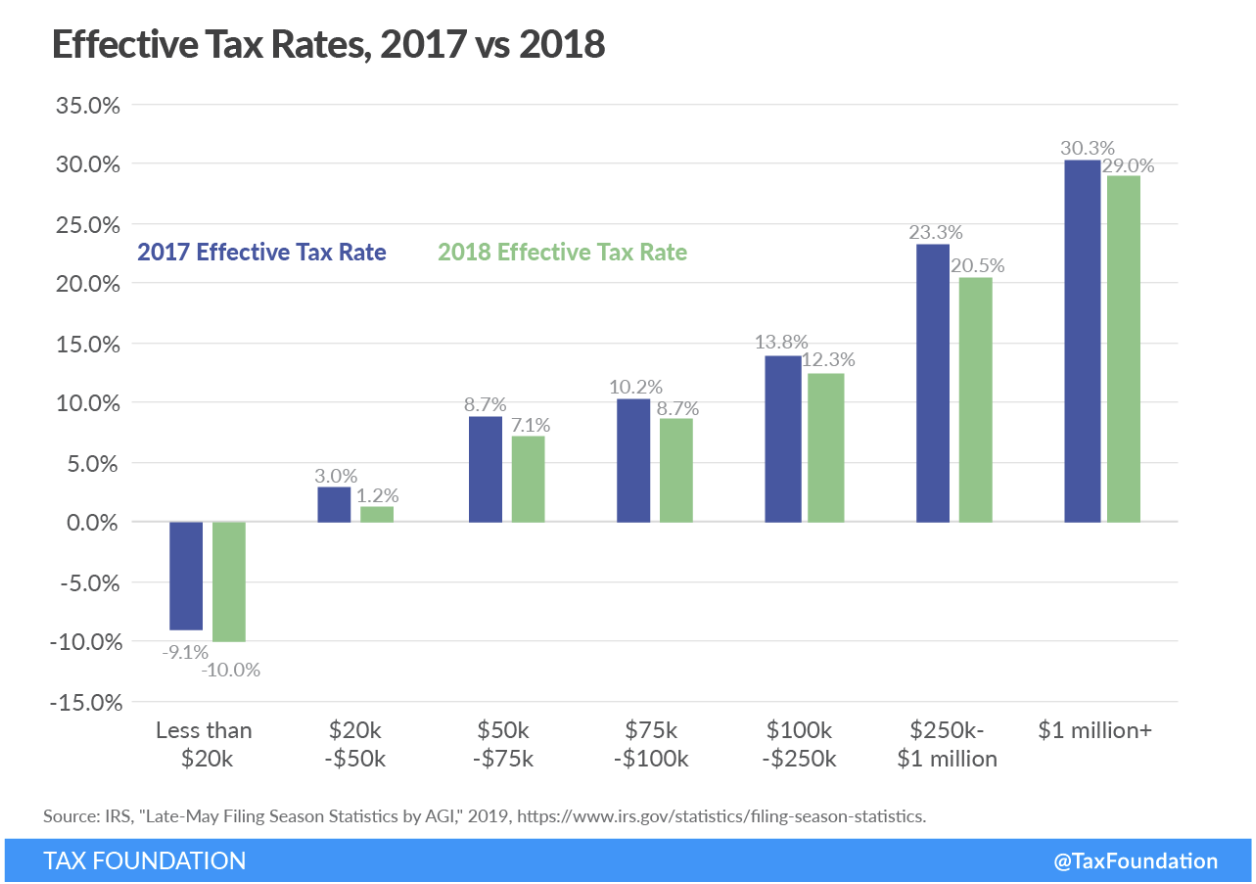 While the overall effective tax rates are down, that certainly does not mean that every taxpayer paid less in 2018.  The figures in the chart above are only averages. In fact, with the limitation of the SALT (state and local tax) deduction to only $10,000, some of our clients ended up paying more tax this year.  Numerous taxpayers in high tax states like California and New York were shocked to discover they owed more.

As David Floyd of Investopedia puts it, “The polls have shown that how you feel about the $1.5+ trillion overhauls depends largely on your opinion of Trump’s presidency.  Individually, how the changes have been felt depends on factors like your income level, filing status and deductions.” The preliminary data indicate that the Tax Cuts and Jobs Act did cut taxes; although individual results may vary.

This article is intended for educational purposes only and is not a substitute for obtaining competent accounting, tax, legal, or financial advice from a certified public accountant, attorney, or other business advisors.  You should not act upon any of the information in this article without first seeking qualified professional guidance from your business advisors on your specific circumstances. The information presented should not be construed as advice or guidance from BFBA.

Podcast: How to Structure And Execute A Transition To The Next Generation

Transitioning a company you have founded on blood, sweat, tears, and cash to the next generation is not easy. It requires a combination of clear planning, and bloody minded persistence…

President Biden’s proposals for individual taxpayers were outlined in the April 28 address to Congress and in an 18-page fact sheet released by the White House. The American Families Plan…

The Employee Retention Credit (ERC) was created as part of the CARES Act.  At that point, the credit could only be claimed if a paycheck protection program (PPP) loan was…

Prior to 2021, your business had to experience a decrease in revenue of over 50% in order to qualify for the credit. The new rules for 2021 only require a…

At the end of 2020, Congress passed, and President Trump signed, a new law that provides for additional relief related to the coronavirus (COVID-19) pandemic. The law allows for businesses…

Deductibility of Business Meals Provided by Restaurants in 2021 and 2022

It has become a cliché in 2020, but what word other than “unprecedented” can be used to describe the events we’ve experienced this year? During such times, tax planning is…

Recruiting During a Pandemic

COVID-19 has impacted many areas of our lives, including how we recruit new employees. At our local universities, almost all on-campus recruitment activities have gone virtual. BFBA will continue to…